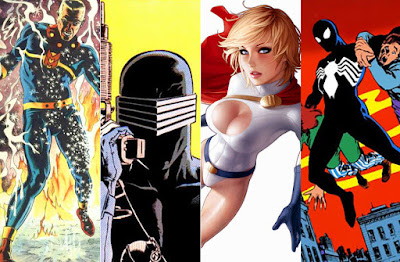 I DIDN'T THINK THIS DAY WOULD EVER COME!

But after 3 decades of pouring money, time, megabytes, brain real estate (& more money) into fine tuning a carefully curated comic book collection, I find myself with most of my missions accomplished, and, for once, without any major collecting goals - but one!  While the outlook of acquiring that copy of Star Spangled Comics #69 remains highly doubtful, the slightly more realistic task of finding good homes for 'my babies' may just be within my reach!

That's right, (can't believe I'm typing this) I've decided to invest in my family's future by selling my comic book collection.  So . . . I've gone through & performed the once unthinkable task of attaching a 'value' to each of my comic books.  In the interest of transparency: I've always used a popular online comics seller as a market price guide for my collection; in assigning values to my books, I've used that seller's prices as a starting point . . . and just started slashing.  Most of the books can be organized into a couple of different categories - there are THOUSANDS of books I'll stick in the Virtual $1.00 Box; there are dozens of TPBs to be had for $5.00 each; hundreds more moderately priced books at the $5.00 price point; and the rest are priced as marked in a Google spreadsheet that I'll gladly share with each interested party reading this - by request.

I've decided to go this route before the inevitable online listings, as I hope those reading this would make likeliest candidates to adopt a few well-loved comic books.  If you think you're such a candidate, please get in touch with me via email, Twitter or Instagram, and I'll share the details!

Thanks for reading, and I hope to be sharing my collection with you soon!

(A note about grading: I'll state the obligatory 'I'm not a professional grader, yada, yada, yada . . .' but have tried to be honest & in many cases conservative in judging condition; please inquire about specific books of interest, & I'll be happy to share more detailed descriptions and/or photos)

(A note about pricing: I stand by the prices listed.  At this point in my de-accession process I don't have the skill, time, or inclination to haggle, though I will make the concession of eating the continental US shipping cost for those spending $50 or more.  While I realize it's possible to come across better bargains out in the real world, I honestly think there are some deals - and perhaps even some steals - to be found in this collection)
Posted by marksweeneyjr at 10:46 AM No comments: 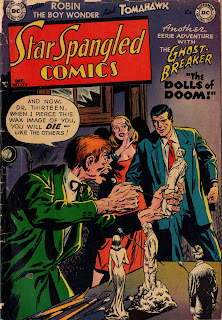 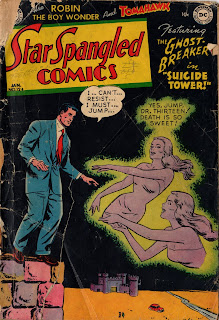 I could not let October slip by without recording another annual episode of Happy Halloween, Dr. Thirteen!  This time out, however, you'll be getting not a single serving, but a DOUBLE DOSE of THIRTEEN THRILLERS!  I'll be recapping & commenting on two of the Scholar of Skepticism's original adventures from the tail end of the golden age, 'The Dolls of Doom' & 'The Suicide Tower' from issue #s 123 & 124 of Star Spangled Comics!

Read more »
Posted by marksweeneyjr at 10:16 AM No comments:

The Many Lives of Tim Hunter: Uncollected Books of Magic 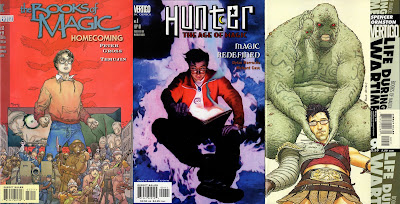 Throughout it's 25-year existence, Vertigo Comics has produced some of the best comics of its time.  I have enjoyed its long-running ongoing series, like Hellblazer, Lucifer & Y: The Last Man, and some short term projects like Brubaker & Phillips Scene of the Crime & Grant Morrison's minis WE3 & Seaguy.  One of my favorite series through its several incarnations is The Books of Magic, which, like most of the great early Vertigo stuff grew from deep roots in the DC Universe.  I am super excited about its imminent relaunch - as part of Vertigo Comics' 'Sandman Universe' imprint - and the opportunity to once again follow the adventures of Books' protagonist, the young mage, Timothy Hunter!

Tim Hunter, not to be confused with that other bespectacled master mage-in-training (let's call him 'He Who Must Not Be Named'), has had a fairly decent publishing history & there have been several attempts to relaunch the concept of the inexperience magician, prophesied to the the 'greatest of his age,' learning the ropes & growing into his role as master of the mystic arts - some of these attempts finding more success than others.  As my favored topics here include uncollected comics, to celebrate the latest incarnation of Books, I thought I'd take a brief look at a trio of Books of Magic relaunches: the Peter Gross-written run of BoM from issues 51-75 of the 1st ongoing series, Hunter: The Age of Magic, and Books of Magick: Life During Wartime, almost all of which have yet to be reprinted.

Read more »
Posted by marksweeneyjr at 12:19 PM No comments: 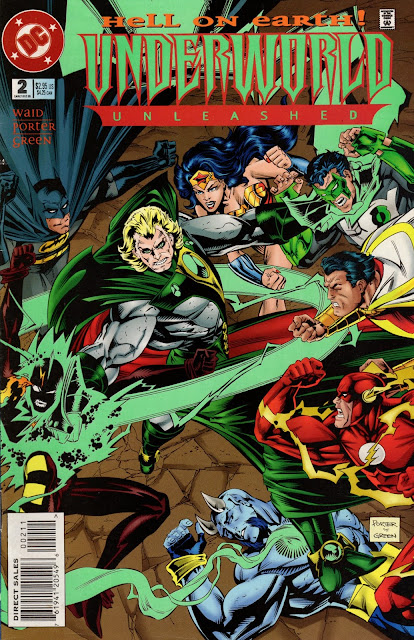 ITG is back with another participatory episode in this year's #BestEventEver blog/podcast team-up!  For the past 3 years, a loose confederation of comics bloggers & podcasters has gotten together to jam on one of DC Comics' annual x-over events - and this year, we've decided to dig deep into 1995's Underworld Unleashed!

The UU story, which shined a light on the villains of the DCU, ran through a 3 issue core mini series & over 40 tie-ins throughout the DC line.  On this episode, I'll be recapping issue #2 of Underworld Unleashed, in which Neron momentarily turns his gaze away from the villains, and instead focuses on DC's greatest heroes!

Read more »
Posted by marksweeneyjr at 10:23 AM No comments: 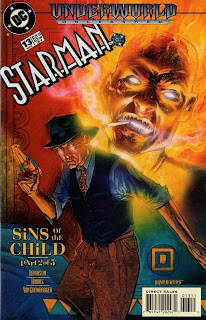 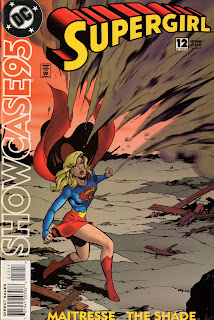 I'm thrilled to once again participate in what's become a fun annual tradition, the #BestEventEver blog/podcast team-up!  For the past 3 years, a loose confederation of comics bloggers & podcasters has gotten together to jam on one of DC Comics' annual x-over events - and this year, we've decided to dig deep into 1995's Underworld Unleashed!

The villains of the DCU got a chance to shine during this event, and some pretty interesting match-ups came about between the villains & some unfamiliar opponents throughout the DC line.  Case in point, on of the 2 stories I'll be recapping & commenting on: retired Golden Age hero, Ted Knight (formerly Starman) takes on infrequent Batman foe, Dr. Phosphorus in Starman #13.  And in one of the stories in the 12th issue of the anthology, Showcase '95, Starman-cast member, The Shade, is confronted by the primary antagonist of Underworld Unleashed, Neron!

If you're interested in taking the plunge with us, I encourage you to:

Read more »
Posted by marksweeneyjr at 10:17 AM No comments: 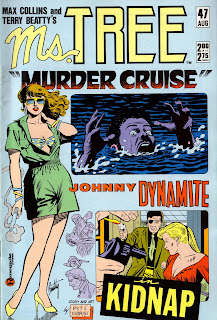 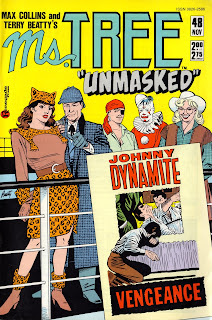 Ms. Tree Theatre is back to bask in the dying glow of late summer!  To celebrate a great season, join Max Allan Collins' & Terry Beatty's iconic indie comics private eye on a Carribbean cruise -- I know, I know, this is Ms. Tree we're talking about: sharp wit, lots of violence, great hairstyle -- why don't we call it what it is -- a 'Murder Cruise!'

25-ish minutes of recap & commentary await, if you:

Read more »
Posted by marksweeneyjr at 4:35 AM No comments: 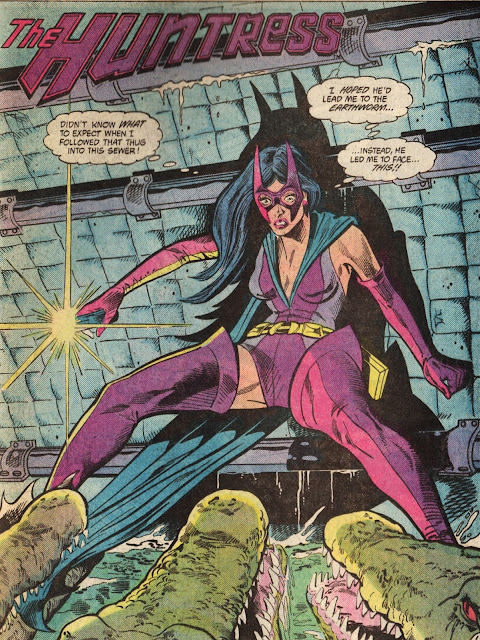 In this episode of ITG's ABCs (which is short for Anthology & Back-up Comics Stories), I'm having a look back at a 5-part story running through the fantastic Huntress back-up feature in Wonder Woman #s 309-313!

Join me as I recap and comment on this story featuring the Dark Knight Daughter & the debut of a sinister, but obscure villain with an unusual power over the vermin of Gotham City!

Read more »
Posted by marksweeneyjr at 9:46 AM No comments: 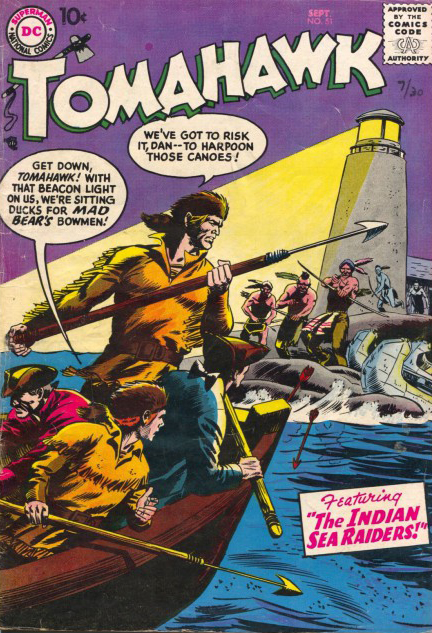 On this episode of ITG, we're celebrating the United States' birthday by taking a look the 1st story from Tomahawk #51 - 'General Tomahawk,' featuring a cameo appearance by father of the United States George Washington, and an unlikely set of disguises for DC Comics' premier frontier hero, Tomahawk & his teenage side kick, Dan Hunter, who attempt to infiltrate an enemy camp as practicing minstrels!  I honestly tried to keep the singing to a minimum on my recording, but if you're brave enough:

Read more »
Posted by marksweeneyjr at 7:25 AM No comments: 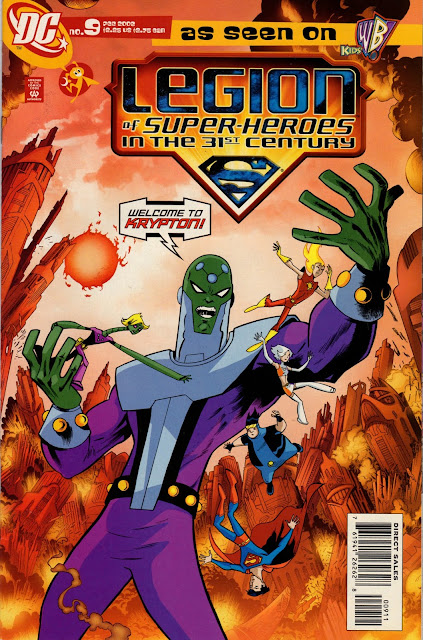 My favorite Coluan is by far the Legion of Super-Heroes' Brainiac 5 - and I love reading stories about his adventures in the far future.  But if there's anything better than reading about 1 Brainiac, it's reading about 2 -- sort of . . .  !  In this episode, I'll be recapping & commenting on Brainy & his teammates' animated-style adventure from Legion of Super-Heroes in the 31st Century #9!

Read more »
Posted by marksweeneyjr at 11:45 PM No comments: 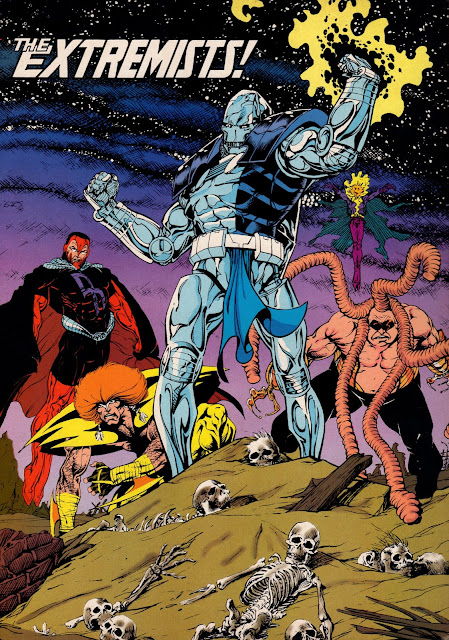 We interrupt this regularly scheduled Super-Blog Team-Up for an nWo-style takeover featuring some very bad dudes from the DC Universe! Cue the music!

I was pleased & privileged to accept the return invitation to 'stand in' for the dearly (at least for now) departed Super Bloggers - and to mark the occasion, I thought I'd adapt an unused Where's The Trade? idea with a brief profile of some of my favorite comics 'stand-ins' - the bad boys from the planet Angor, THE super-villain team to beat in early 90s Justice League comics & cheeky Marvel villain analogs: The Extremists!  I'm amazed that, for a group based on such a throw away idea (analogs of 4 top Marvel villains -- and Dormammu), creators have been using some version or another of the Extremists in comics for almost 30 years!

Before I cover the publishing history of these true Harbingers of the Attitude Era, I invite you to check out the other late spring offerings from some fellow blasts from the #SuperBlogTeamUp past:
The Extremists 1st appeared in Justice League Europe #15 (June 1990) in the first of a 5-part story called 'The Extremist Vector' - but the roots of this villain team date back much farther than that.  In comics cover dated Feb. 1971, DC & Marvel - or maybe I should say Justice League writer Mike Friedrich & Avengers writer Roy Thomas - exchanged charming, naughty swipes at the competition with the introduction of a team of super doppelgangers in their respective books.  In issue 85 of the Avengers, Thomas debuted The Squadron Supreme, a team of alternate dimension JLA analogs including Hyperion (Superman) , Nighthawk (Batman), Lady Lark (Black Canary) & The Whizzer (Flash), among others.  This Squadron Supreme was a revised version of a villain team of JLA dupes Thomas introduced in the Avengers about a year and a half previously called The Squadron Sinister.  Meanwhile, in Justice League of America #87, Friedrich introduced a doppelganger Avengers in The Assemblers (later, the Champions of Angor, The Justifiers & The Retaliators - no one could seem to keep this straight), whose membership included Wandjina (Thor), The Silver Sorceress (Scarlet Witch), Blue Jay (Yellowjacket) & Jack B. Quick (Quicksilver).  Each team of analogs met, misunderstood, and fought their respective series' stars, before in each case parting as friends.