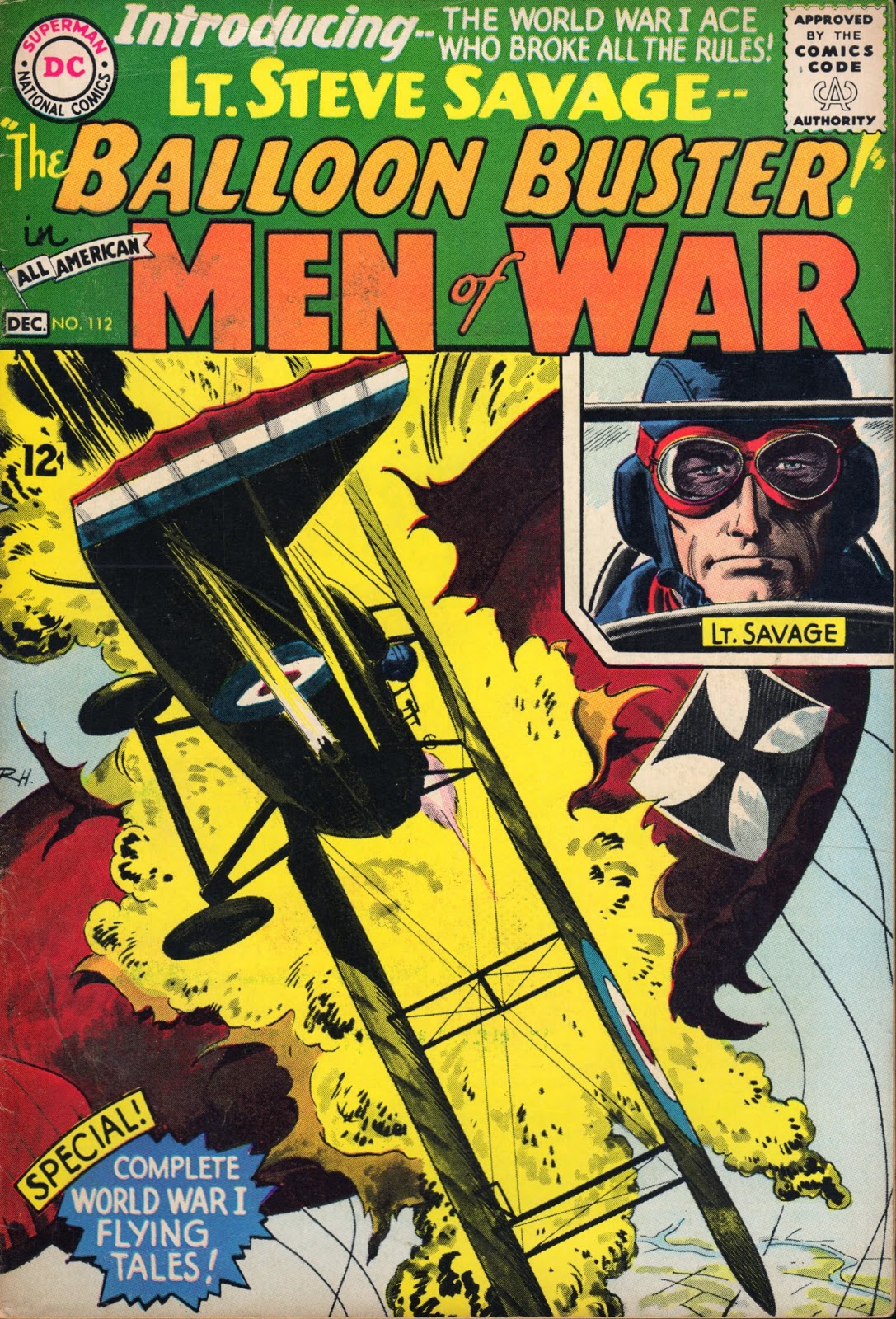 Steve Savage, The Balloon Buster first appeared in All-American Men of War #112, cover dated Nov.-Dec. 1965. This first story (one of 2 stories in the issue, Men of War was an anthology title) was written by Robert Kanigher, who not only edited DC's war titles, but wrote scores of stories for his combat titles and was by this time in his 7th year writing Wonder Woman.  Earlier in the year, Kanigher and collaborator Joe Kubert introduced another World War I pilot, Hans Von Hammer, the Enemy Ace, who would prove to be a popular feature for some time.  For Steve Savage, Balloon Buster, Russ Heath provided the gorgeous, detailed artwork.  Heath had been a longtime collaborator of Kanigher's, drawing stories in GI Combat, All-American Men of War and the Sea Devils.

In this story, we meet Steve Savage as a very young man at his homestead in Mustang River, Wyoming, where the 'only thing my Pa could teach me' was to 'forget you've got eyes - arms - legs - you're not a human anymore - yore the gun!'. The Savages were dirt poor (possibly because Steve spent all of his time SHOOTING THEIR MONEY!), and very unpopular in town, so when Pa passed, Steve vowed to make the whole world recognize the Savage name - to make it mean something.
With the start of what would be called World War I, Savage, confident in his skills with firearms, thought he could make the biggest splash fighting for his country and for his name in the early days of air combat.  His white trash reputation followed him through training, where he was just as unpopular with his wing mates as he was in his western home.  He developed something of a rebellious streak, disobeying orders and not playing well with others.

Though not deemed ready for real war situations, Savages commanding officer is forced to send him up due to a pilot shortage.  On this first mission, Savage is to be babysat by 2 veterans, and is told to stay in formation - however, the sight of  German observation balloons proves too tempting a target for the hothead, who breaks away from his wingmen and goes in for the kill.

Savage psyches himself up, becoming 'The Gun' and takes out 3 balloons, but the balloons' protective squadron of German Fokkers were able to easily shoot down the 2 other American pilots.
Racked with guilt, but thinking there is a chance to rescue his fellow pilots, Savage dodges enemy fire and lands his plane twice to pick up his comrades.  With nowhere to store a carry on bag, let alone passengers in his one-seat Spad, Savage ties his fellows to the wings and on the way back to headquarters, manages to out duel the enemy squadron, once again entering his trance-like state, reciting, 'I'm the gun'.
Upon his return, Savage is greeted by an irate major, as Savage's 'passengers' are, of course, dead.  The major is ready to begin court-martial proceedings, just as a general pulls up wanting to know the identity of the pilot who made so many kills.  Despite the major's protestations, the general wishes to issue Savage a commendation, calling him for the 1st time, 'Balloon Buster.' To the general, the kills are all that matter.  In a bit of empty bluster, the major 'decides' not to remove Savage from active duty, insisting the deaths of his comrades on Savage's conscience will be penalty enough.

This is a very good introductory story for the Balloon Buster - a little tragic as all war stories are.  The creepy image of dead pilots strapped to the wings of an aircraft is powerful and helps build Steve Savage's legend as one who, despite an innate decency, will put not only himself, but allies in danger to fulfill his bloodlust which he thinks will honor his father and family name.
Posted by marksweeneyjr at 10:57 AM No comments:

There's been a huge balloon-shaped hole in the comics' blogosphere & the 1st several posts on this blog aim to correct that!

As far as I know, there hasn't been any extensive bloggage covering the career of World War I American flying ace, Steve Savage - until now.  I've been itching to share my love of the DC Universe, and I've decided to start right at the top - or at least way up in the wild blue yonder.

'The Balloon Buster' made not many more than a dozen featured appearances in DC Comics from the mid-60s through the early 80s (and perhaps only 1 appearance of any significance since then), but I've always been fascinated by this character, who had one foot in the Western comics' tradition, and the other in the kind of modern war comics at which DC so excelled in the 1960s.

I'm positive that my introduction to the character came in Crisis on Infinite Earths #9, where Lt. Savage is given 5 panels to wonder at the chaos ripping across space & time, manifesting as some rose-tinted skies.  The look of the Balloon Buster was, of course, what drew my 9 year old self to the character.  Steve Savage's appearance was very distinctive, illustrating that line-straddling tradition of the character, by wearing basically a cowboy outfit with aviator goggles.


It wasn't until much later that I had (financial) access to the character's earliest appearances and could see for myself that, though Savage wasn't given very many chances to shine, the stories he appeared in were top-notch comics produced by top-notch talent.  It was in those early stories that The Balloon Buster first drawled that strange, awkward mantra of violence, from which this blog borrows it's title.

So this blog will begin by reviewing each of the Balloon Buster's featured appearances beginning with next post which will cover the character's debut in All-American Men of War #112 (Dec. 1965). I'll provide a little commentary and some scans from my own collection.  As there are only a couple handfuls of Balloon Buster stories, the focus of this blog will eventually shift to many corners of my beloved (pre-New 52) DC Universe.

As the posts start rolling in, if anyone reading this has anything to say about Steve Savage, Enemy Ace, DC Comics, super heroes or comics in general, feel free to leave a comment!
Posted by marksweeneyjr at 1:59 PM No comments: