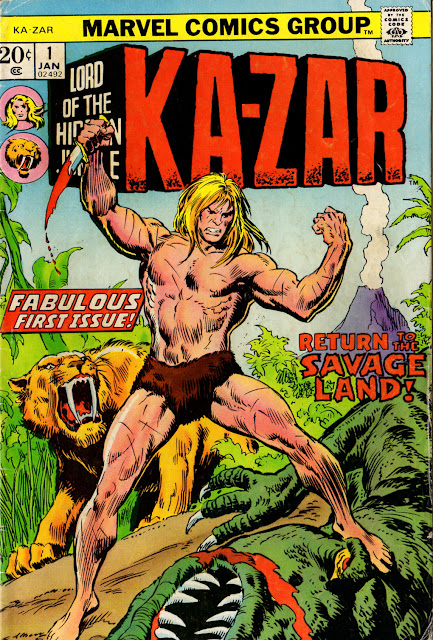 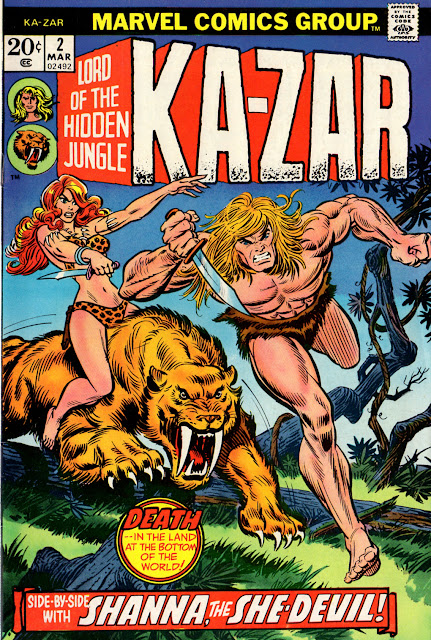 It had to happen! Ka-Zar, Lord of the Jungle meets Shanna the She-Devil! Join me as I take a look at these issues that, though starring a hero who's dull as dishwater, had a tremendous impact on the Jungle Queen.

Also - I'm the Gun is now on iTunes so check out previous Shanna Showcases there.


Theme created using a sample of 'Shotgun' by Duran Duran
Posted by marksweeneyjr at 3:14 PM No comments: 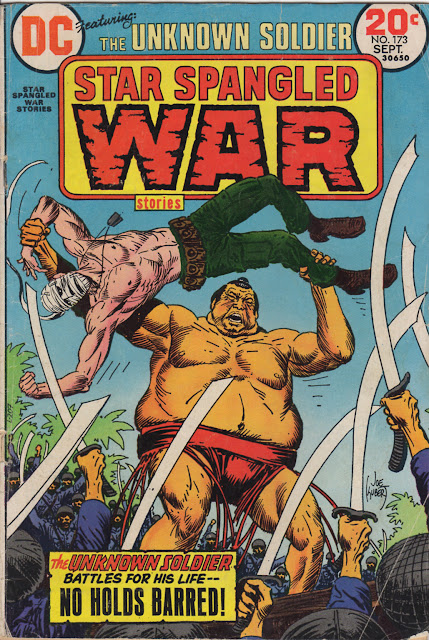 Just when I thought I was done indexing the adventures of Steve Savage - the Balloon Buster pulls me back in!

Looks like my research was faulty in preparing the number of posts I'd devoted to Steve Savage, The Balloon Buster, as tucked in the back of Star-Spangled War Stories #173 is a little gem of a story called 'Robert Kanigher's Gallery of War: The Kill.'  This nifty little 7-pager by, who else, Robert Kanigher, and drawn by Frank Thorne, besides being a great back-up to the main Unknown Soldier story contains a tiny, minute, miniscule, infinitesimal cameo appearance by not only Steve Savage, but by Hans Von Hammer, the Enemy Ace.  I went back & forth about even including a recap of this story on the blog, considering the brevity of Balloon Buster's involvement but the obsessive completist in me violently rejected the very idea of skipping it over! 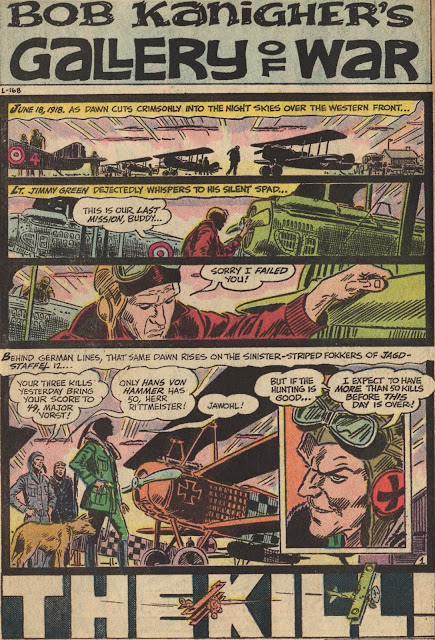 The story contrasts the final day of 2 WWI pilots, American Lt. Jimmy Green, and German Major Vorst. At dawn, each pilot climbs into his plane, preparing to enter battle.  Lt. Green, seemingly of low confidence level, and strangely talking to his plane, calling it 'Buddy,' and Major Vorst, brimming with (over)confidence, swearing this day to be the one where he overtakes German ace Hans Von Hammer's record number of kills - each takes off from behind his respective line for their inevitable clash above No Man's Land.

Lt. Green, mopily making his way through the melee spots an aggressive American plane 'tearing apart a Jerry sausage for breakfast.' Green marvels at the one American pilot who has the guts to be so brazen - Steve Savage! Savage screams vertically through the flak, his tiny noggin barely distinguishable at a great distance. 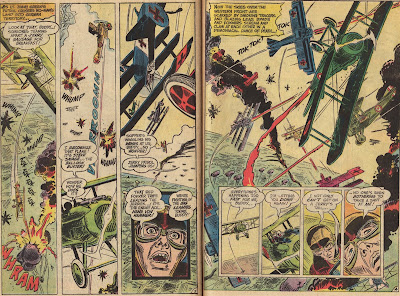 Lt. Green's commanding officer signals the approach of a German patrol - led by the red, 3 winged signature Fokker of HVH, the Enemy Ace!  The next half splash - a beautifully illustrated cluster**** of dogfightin' action presumably contains a tiny cameo of Savage's and HVH's plane, chasing through the carnage, a Lt. Green laments that no one has yet to take a shot at him (careful what you wish for . . . )

Enter Major Vorst's patrol - the major notices Von Hammer's plane in the battle, and so enters anxious to pull even with and then surpass the Enemy Ace's kill count.  Vorst quickly and easily gets Lt. Green is his sights, and lets loose with his bullets, wounding the American pilot.  Green manages to loop around, but Vorst proves too skillful a pilot and evades Green's attack.  The German loops around and pours more hot lead into the doomed American, which makes Green kill #50 - the same number held by Von Hammer.  Vorst moves on to his next pursuit too quickly, however, as the dead American pilot leans into his stick, causing his plane to climb higher and higher.  It stalls at it's peak, and inevitably, preposterously, crashing into Vorst's plane, ending the German's quest for kills. 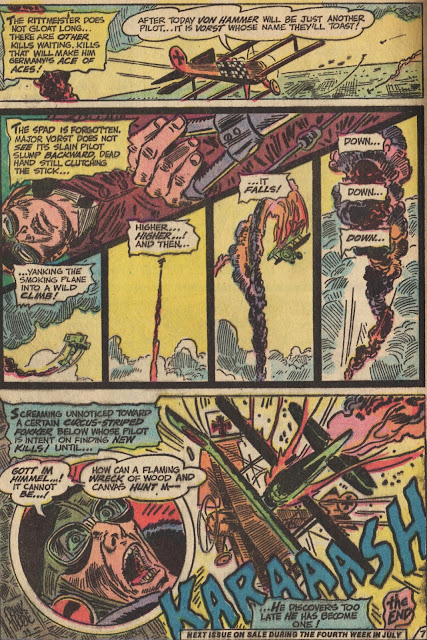 This is a nice little story (to be expected from Kanigher) with an ironic twist, sweetened somewhat by the cameos of DC's more famous WWI aces.  It had been some 20 issues since Von Hammer graced the pages of SSWS, and about 2 years since Steve Savage's last appearance.  The 2 would appear again, together (or against one another, more accurately), next in SSWS #181, so it must have been on writer Kanigher's mind to reintroduce the aces to DC's war book readership before their inevitable clash.  I've gotta think that the seeds were planted by this time for the idea these 2 meet based on a letter column response (by Archie Goodwin) printed in this issue: 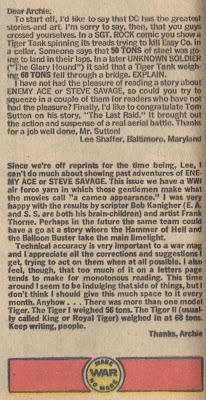 Of course, Frank Thorne, who'd recently wrapped up work with Kanigher on an excellent run of Tomahawk, would go on to illustrate those later EA v. BB stories, as well.
Posted by marksweeneyjr at 10:36 AM No comments: 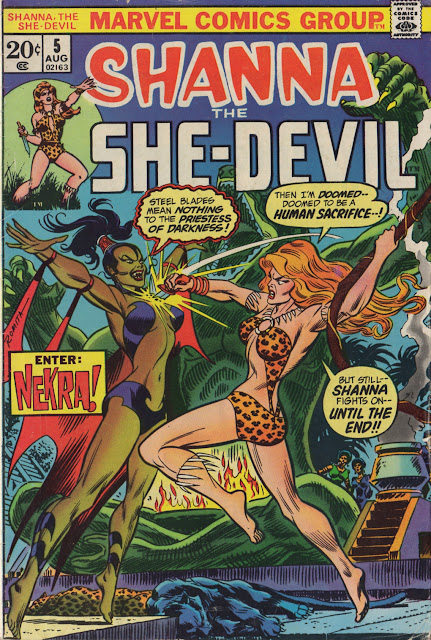 Listen as I breeze through the final 2 issues of Shanna the She-Devil's too short-lived solo series!  Shake in fear of the new villains Mandrill and Nekra, and marvel at some gorgeous Ross Andru/Vince Colletta artwork below!

Also - I'm the Gun is now on iTunes, so check out the infant episodes of the series there!

Theme created using a sample of 'Shotgun' by Duran Duran.

Posted by marksweeneyjr at 10:54 AM 3 comments: 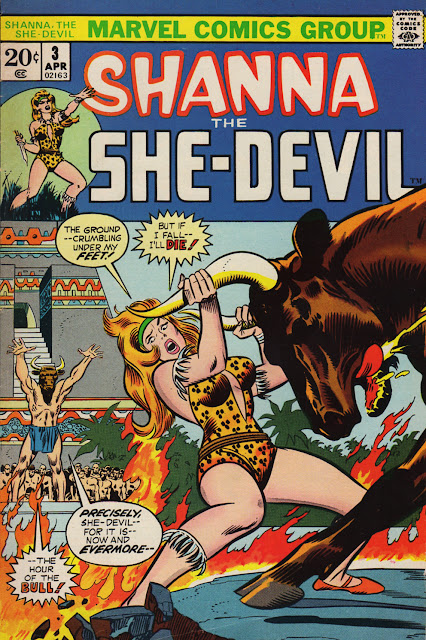 This week we swing through the jungle to shine a light on Shanna The She-Devil #3 (Apr. 1973)!  This exciting issue sees Shanna 'discovering' an ancient Greek city in the middle of the jungle!

I promise, this issue is awesome, so please get through the 1st 5 minutes of this podcast which contains some rambling musings about my collection & a very mild, obligatory 'I don't like new comics' rant.

Theme music created using a sample of 'Shotgun' by Duran Duran
Posted by marksweeneyjr at 6:32 AM No comments: